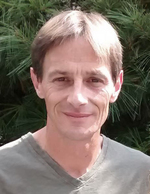 Michael lived quietly and struggled with many things in his life, but he had a sweet, loving heart and a quirky sense of humor. He loved hearing stories about his childhood, often encouraging their telling then being the person who laughed the most as they unfolded.

Michael loved his mother deeply, but his greatest love was for his daughter, Makaylee. He talked about her often and they were working to build a lasting relationship. Michael was also a loving friend, especially to Sonya Lloyd, and he will be missed greatly.

He leaves behind a large extended family including his grandmother, Carla Moure, and his cousin, Angela Floyd. Michael’s father, John Elliott, with whom Michael has long been estranged, is believed to have passed away in 2020. His mother, Michele Moure-Reeves, who is grieving Michael’s loss and wishes only solitude at this time, will plan a simple memorial service in remembrance of Michael’s life for later in the spring (pandemic restrictions permitting).